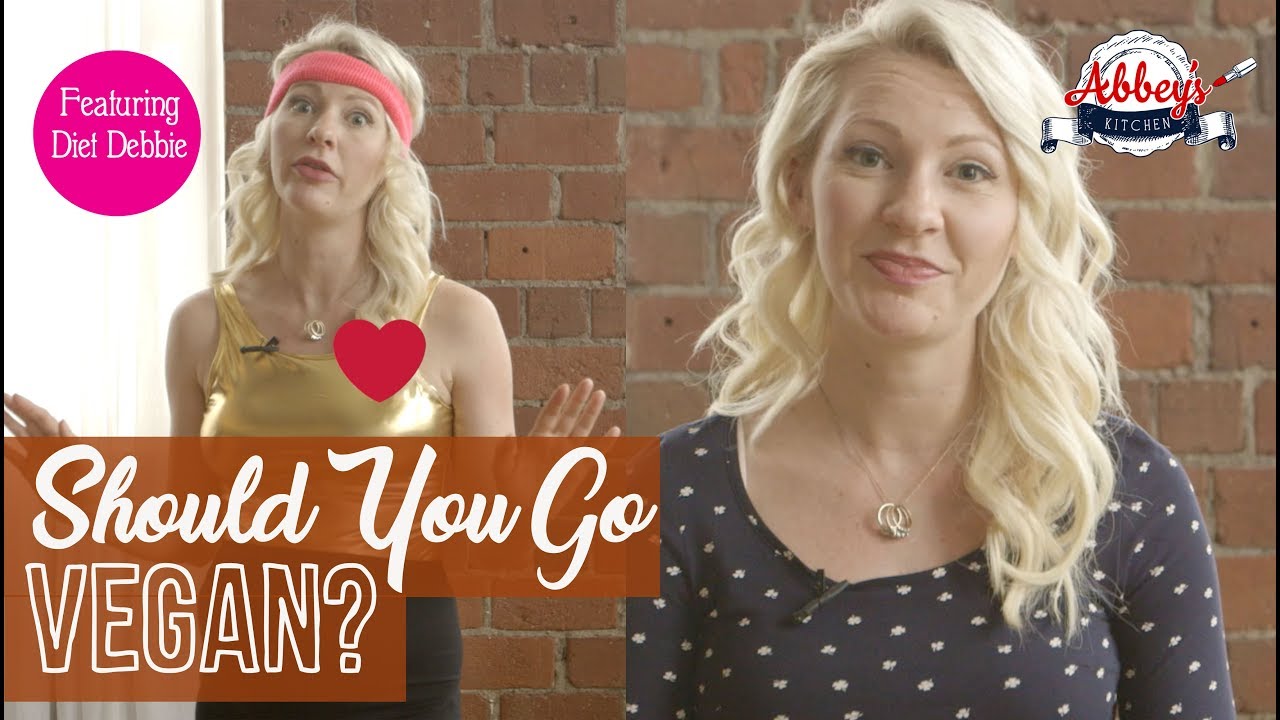 In this episode of Abbey’s Kitchen, Abbey is joined by her pregnant buddy Diet Debbie, who’s thinking about going vegan since it’s become a super trendy thing to do. Debbie wanted to run this by Abbey and get her opinion.

Abbey isn’t vegan, but is still a huge fan of plant-based protein sources. Abbey loves developing vegan recipes and has enjoyed collaborating with amazing food bloggers in the past like Candice from the Edgy Veg and Sam from It Doesn’t Taste Like Chicken. So first, Abbey wantst o find out what Debbie has heard about the health benefits of a vegan diet.

Debbie has heard that a vegan diet is very heart friendly. Abbey agrees with this and shared a meta-analysis that found that people who followed a vegan/vegetarian diet has lower blood pressure compared to those who consumed an omnivorous diet.

One reason Debbie is going vegan is because of the food documentary What the Health. Debbie learned about the association between meat and cancer.

Abbey found some research that a vegan diet may lower your risk for certain cancers, however it is unclear whether this is because you are cutting out meat or because you’ve incorporated more fruits, vegetables and whole grains since going vegan.

Debbie is excited to go vegan, so she can save some money! Abbey found some research that vegans/vegetarians save at least $750 more than meat-eaters per year.

Debbie also hopes her vegan diet will help the environment. Abbey agrees that producing meat takes a lot of energy and water, which puts a huge strain on our environment, however the distance our food travels, whether it’s meat, fruits or veggies also contributes significantly to our greenhouse gases.

Debbie is surprised that Abbey has agreed with her to go vegan, and wants to know whether there are any drawbacks.

Abbey reminded Debbie that a vegan diet may be too restrictive for some since major food groups are eliminated. For some that don’t have a strong nutrition background, understanding what nutrients you need may seem overwhelming and lead people to take untrustworthy nutrition advice or binge on highly processed vegan snacks. To make sure you get enough nutrients, Abbey recommends taking a variety of supplements such as calcium, vitamin D, omega-3 fatty acids, vitamin B12 and iron.

Abbey reminds Debbie that there are a lot of reasons to enjoy more plant-based foods in your day. Abbey is a huge fan of the flexitarian lifestyle, which allows her to enjoy her favourite foods in moderation and is centered around listening to her body. The bottom line: listen to your body and do what feels right.

For more tips on staying healthy, recipes, dieting, and information fit for consumption by foodies everywhere stop by Abbey’s blog.